The indigenous people of South-America succeeded over many centuries in supplying even large cities with food despite nutrient-poor primeval forest soils. This was only possible by using the black earth “Terra Preta de Indio”. Terra Preta differs from other black earths in its origin. It was specifically produced by humans, who produced it with a composting method combining leftover charcoal from their bonfires, microorganisms (e.g. lactic acid bacteria), nutrients (e.g. animal manure and urine) and biological waste.

Over time, the black earth grew to a depth of several metres. The secret of this very productive soil lies in the combination of the biochar enriched with microorganisms and fertilizers.

Soil scientists, archaeologists, geographers, agronomists, and anthropologists who study Terra Preta now agree that the Amazon’s dark earths were made by the river basin’s original human residents. They have dated them back at least 2,500 years – some even as far back as 6,000 years.

Compared with the surrounding soil, Terra Preta can contain three times as much phosphorus and nitrogen. And as its colour indicates, it contains far more carbon. Samples taken in Brazil by William Woods from the University of Kansas in Lawrence, showed the Terra Preta had a carbon content of up to 9%, compared with 0.5% for plain soil from places nearby.

We are only beginning to understand how pivotal these soils were to life in ancient Amazonia. Only through modern research has it been possible to scientifically prove the complex biological interrelationships and the associated effects. The population was obviously much bigger than previously thought. And there’s increasing evidence that it was biochar that made these complex Pre-Columbian civilisations possible – as it made the soil fertile enough to grow food for such large numbers of people.

The value of this earth was recognized in the 20th century. Today, Terra Preta is regarded as a potential solution to the world food problem and climate change through permanent carbon sequestration. 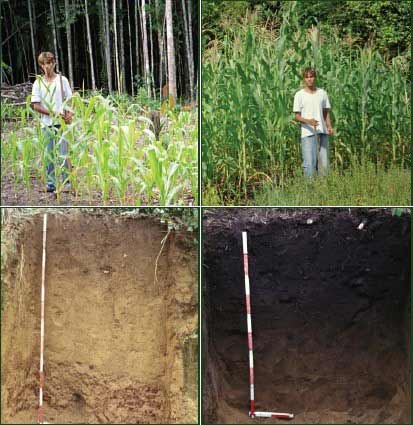 Serious research began in the 1990s. Soil scientists all over the world were researching the composition of Terra Preta and the secret of its origin. Prof. Dr. Bruno Glaser and his team at the University of Bayreuth, Germany were able to prove that the Terra Preta was created by man. In 2006, the original process of Terra Preta extraction was reconstructed. Shortly thereafter it was possible to use a biotechnological process to produce “black earth” whose genetic fingerprint and properties correspond to those of Terra Preta.